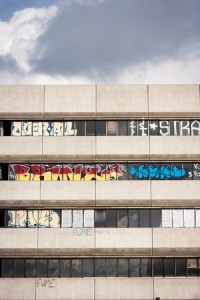 Graffiti hurts everyone: homeowners, communities, businesses, schools and taxpayers. It is not a victimless crime and contributes to lost revenue associated with reduced ridership on transit systems, reduced retail sales and significant declines in property value. Even after initial removal, graffiti generates perceptions of blighted communities and associating with gang activity. So property values in and around heavily graffiti areas will suffer as this functions to indicate a downward spiral.

Safety
Patrons of buildings, parks, or public facilities where graffiti vandalism has occurred may feel that if graffiti is tolerated, then other more serious crimes, such as theft and assault, may also go unchallenged. And more often than not, this idea proves correct.

Consider a building with a few broken windows; if the windows are not repaired, vandals take this as an invite. Weather they’re breaking more windows, entering the structure unlawfully or ‘tagging’ it, the dilapidated condition of a structure is likely to invite illegal activity and further dilapidation. This is not only impacts the structure itself but surrounding structures and neighborhoods as well.

Clean up costs
Although the cost of graffiti vandalism in the U.S. has yet to be definitively documented, for many communities, private property owners, and public agencies the cost is rising each year. Figures from a variety of cities across the U.S. suggest that graffiti cleanup alone costs taxpayers about $1-3 per person each year.